Podcast interview by Janet Taylor on "Got Clutter? Get Organized!" with professional organizer Nonnahs Driskill. Topic: Why do men lose their keys? Why it's more important to get long than have a perfectly organized home. How can you compromise with your housemates, partner, and family?

Men losing their keys is a stereotype for a reason!

Why do men lose their keys?

While it’s true women also lose things and can be disorganized, it does seem to be a more prevalent problem with the males of our species. And as I tell Janet in this episode of her award-winning podcast, I have no idea why men are like this! How do they lose things so often? The same things are lost over and over again. 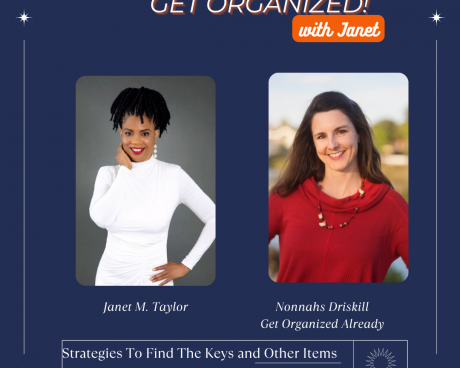 I loved talking to Janet because she is so calm and has a great Philly accent! She knows the answers to every question she asked me, but still kept me engaged. I hope you will listen. Like all podcasts, there are long intro and outro sections. The interview with me is from around 2:30 to 12:30.

Strategies to Find the Keys

Janet’s first question: What made you become a professional organizer?
Nonnahs: It came easy to me. I love people. I love figuring out how to help them. I’m curious about what’s working for them. So, back in 2009 I was helping out a friend of mine who is really messy(!), and she pointed out that I could turn helping people get organized into my full-time job.

Janet: WIth the men in our lives, what is it about the keys and other little objects that make it so hard for them to find.
N: This is a stereotype and I first want to say that I help a lot of women who struggle with this as well. I’m not picking on the men here. It can be anyone! But the truth is, people ask me why their husbands lose things all the time, and I really don’t know. Maybe it’s biological because we are more visual?
J: Women are sometimes more visual. We can visualize where we put things. But some people just don’t remember where!

J: What are some strategies you share with your clients to help them with this problem of losing important things?
N: Some organizing advice is obvious. Put things in the same place. Give items a home. Another trick, if you find someone is repeatedly leaving an item somewhere that isn’t where you have set up its “home”, try to be more flexible about it and compromise to find a different home for that item.

N: Another important perspective to remember is the interpersonal piece of the situation. If someone else in your house is doing something which is frustrating you over and over, the issue isn’t the keys. The real issue is you aren’t feeling respected or you and your housemates aren’t communicating well. There is no one way to organize the house. People are so different and it’s important to talk about it.

J: Yes. One lady told me, My husband needs to change! He drops all of his things by the door. So I said, Create a system by the door. A hook for his hat. A dish for the keys. Some people hire us and they tidy up their space before we arrive. That won’t work in the long run because we need to see how you live. You need a shoe rack near the door if people kick their shoes off there!

J: How do YOU stay organized? With running your home and your business.
N: It could be a long answer. But basically, I’m generally an organized person and I hire people to do things I am no good at!
As far as my family goes, there’s a lot of communication. After about 7 years (a long time!) of living with my husband, I realized he isn’t leaving messes to make me mad. I don’t know why he doesn’t pick up his things and put them away. But it has nothing to do with me. That realization helped me so much! It’s more important for us to get along than for the house to look a certain way. I know where my things are. My family knows where their things are. When the common areas get cluttered, sometimes it bothers me so I tidy up by moving their stuff to their rooms. Sometimes it doesn’t bother me as much, or I have other things going on. In that case I leave the clutter for them to pick up when they are home.
Staying organized is easy for me. The challenge is with the other people in the house. How do we all respect each other?
J: Yes. My boyfriend is 6’2” so he put hooks up high in the kitchen because he’s the cook. Someone saw a picture of the kitchen and said, Those pots are up high! but I said, I’m not the cook! It’s mostly making sure everyone in the house gets along. Not making sure everything is in its place all the time. I like that philosophy so much!

In transcribing the interview, I edited for clarity and readability.

Thanks for checking it out!