Marie Kondo is a professional organizer. She gets paid to help people throw away their excess clutter and organize what they keep in their homes.
Before January 1st when her Netflix show “Tidying Up with Marie Kondo” dropped, many people didn’t know this was a profession.

I’m so grateful to the show for exposing you all to professional organizing! Organizing is a really great job. It’s also important and deserves screen time. However, there are some serious holes in the portrayal you are seeing on Netflix. 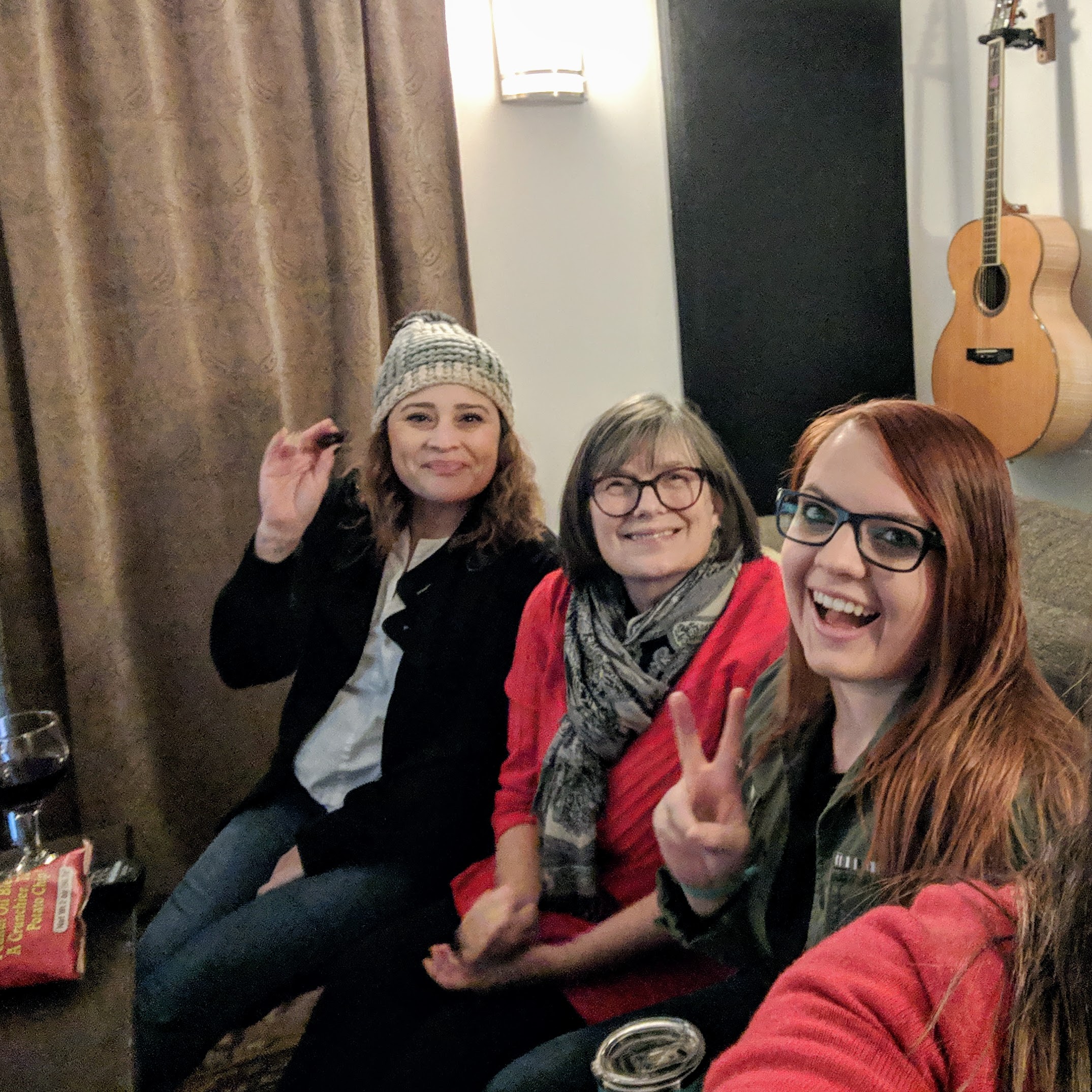 The organizers from get organized already in Pasadena got together this weekend to watch 2 episodes together and talk about them. It was SO FUN! Here are the truths and lies we saw about professional organizing in our own words.

Marie is tidy. She presents herself very well. She doesn’t bring a lot of extra stuff into the homes where she’s working.
These are all things you want in an organizer.
If you hire an organizer who runs late, shows up unprepared, and comes across as scattered, I think you would agree you may need to find another organizer. 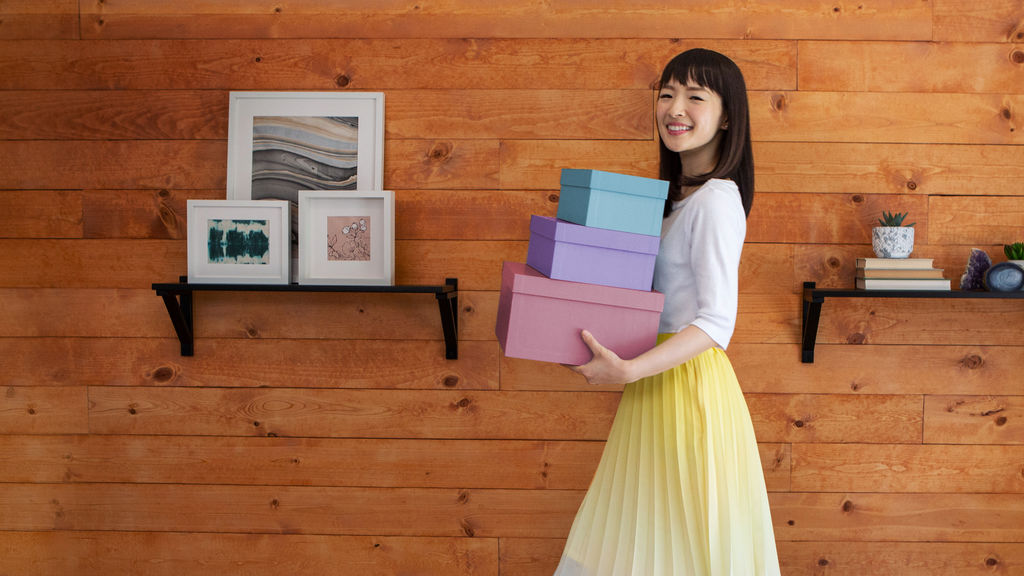 It may seem funny to hear a lady explain how she’s holding on to multiple bicycles and 7 years of clothing (episode 6) for a fictional baby who hasn’t been conceived. But Marie Kondo never scolds, laughs, or scoffs at her clients or their explanations.

An organizer will not laugh at your reasons.
Nor will we judge you for the mess in your house. Mostly because we know, better than anyone else on earth, that your mess is not about the things. It’s about your life.
That is serious, serious business right there. And all of those ideas that sound crazy to other people about why you are holding on to things are clues to us about how to help you.

Truth #3 Organizing every item in a house takes forever.

Unlike other home improvement or makeover shows, “Tidying Up with Marie Kondo” shows you a day count. They also show you a bit of the physical struggle. Almost everyone involved in tidying up complains about being really tired or worn out.
This is hard physical work. It is also very hard mental work to make so very many decisions.
Decluttering a home isn’t a one day task. We work with clients multiple times for hours at a time.
From our conversation:

Me- Gina, Did you believe what was on the show?
Gina- I thought it was a little unrealistic.
Me- Like what?
Gina- The people that had the harder time; that couldn’t get through the pile. And just to leave them with the pile. But then we don’t know if she really left them. How long did she stay with them? How many hours did it take? That would be helpful to people who don’t know.

Me- They were working on it for days. Every day.
G- For like a month and a half!
Janice- I think that’s unrealistic in terms of real people’s lives and the time commitment. We already have to schedule in little blocks with them.
G- Because people get exhausted. 4 hours is so exhausting to make decisions.

Truth #4 The results are usually not Insta-worthy

Sometimes the after shots on “Tidying Up with Marie Kondo” are not much different from the before shots at all. Sometimes I felt like they put the before shots in black and white just so there’d be a visual difference.
This isn’t cheating, though.
As Frank said in episode 5, Our house looks fine to a visitor, but we know what a mess it is behind the doors. And it bothers us to know. Cleaning out the closets and cabinets is a big deal and worthy of an after shot, even if a bystander can’t spot much progress. 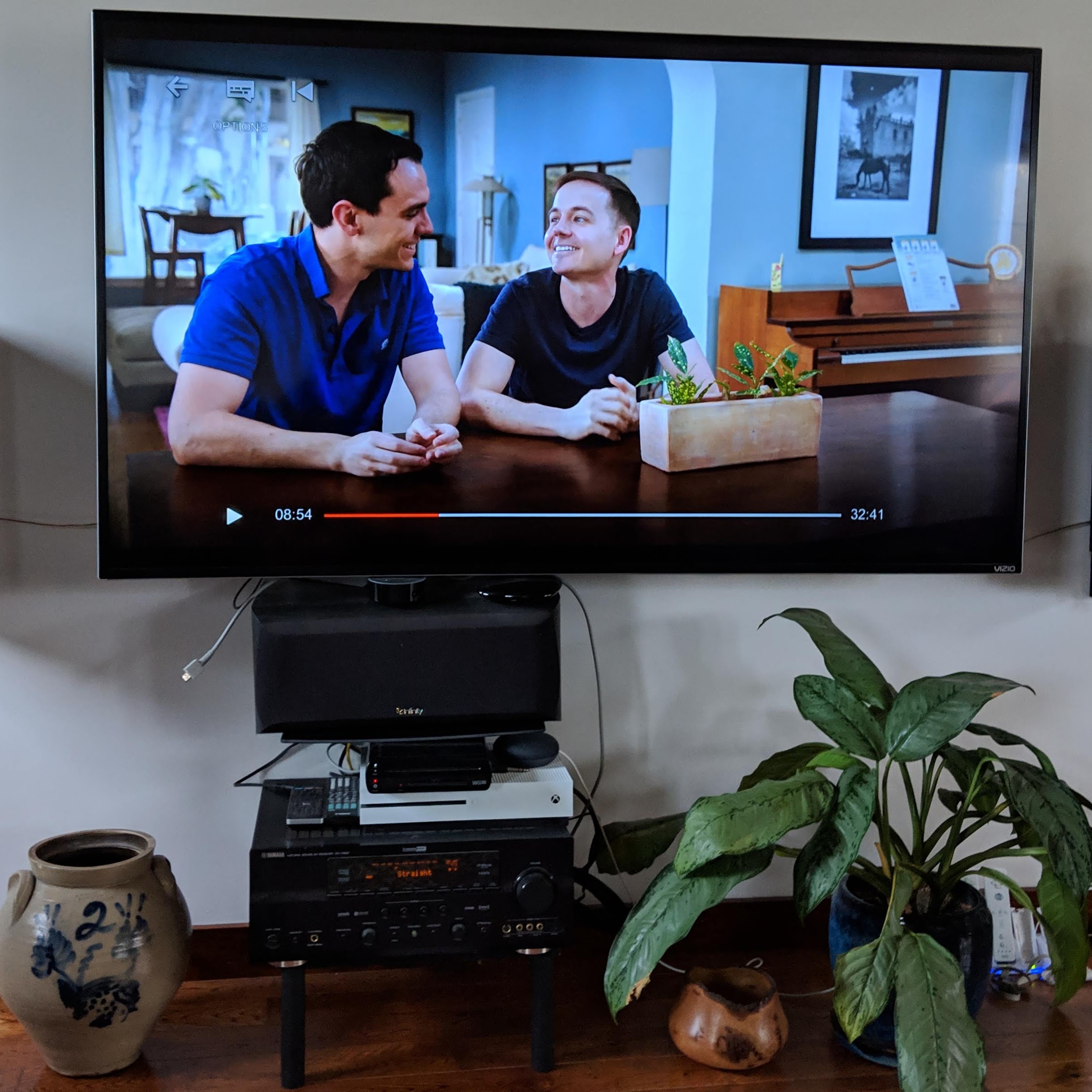 Speaking of before and after shots, here are the lies about professional organizing we noticed on the show.

Professional organizers who work with the hoarding disorder do so with the assistance of a licensed behavioral psychologist. It takes a team of professionals to help a person learn to manage their disorder.
I saw signs of the disorder portrayed in Episodes 2 and 6 which were never even addressed.
As our organizer Wenona said:

Wenona- I have mixed feelings about it. I mean it’s edited so we don’t know exactly what was going on in these sessions. We could’ve used more info about the process — about people who were having difficulty letting things go.
It’d be nice to know how they came to the conclusion of, OK I’M ready to do this and move on. Where it seemed like it was not going anywhere to begin with.
I think seeing more of the psychological and emotional process would be helpful for people who are considering hiring organizers.
It might also give organizers tips on how to deal with different personalities or situations in someone else’s space.

And how about Episode 1 with the passive aggressive dad and the postpartum mom?

Gina- It was actually good to see them finally come together in harmony. But I don’t know how long that’s really going to last. 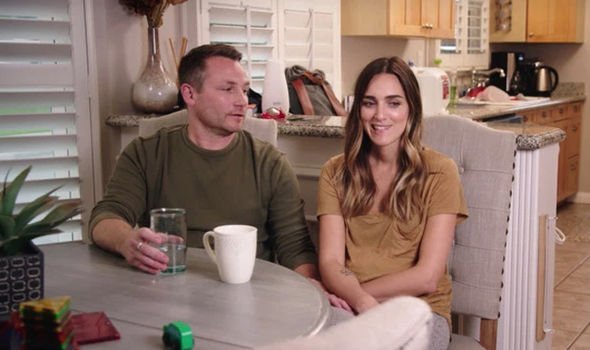 Wenona- Yes, and I wonder what happened? How did it go from one walking out on the other to them like smiling and home-y together at the end?
We are all in relationships, we know we are going to have our differences. But I mean for people who are considering this, to have an organizer, it might be helpful to see the real process.
It seemed like Marie was so removed from everything.
She wasn’t really part of their process, and for us we are the on the front line with them.

Me- Katie, how many episodes have you seen?
Katie- I’ve seen 4 of them. I think it’s unrealistic.
Me- What part?
K- When you walk into a client’s home there is not that 1 through 5. There’s not that pathway. And your books aren’t going to just magically pile up. I just don’t think [clients] get to that point alone — like it looks in the show.

Me- Denise, what did you think of the show?
Denise- My opinion is the book was more extreme than the program. I feel like her approach in the book was very hard line and she had a softer approach in the show.
Me- Do you think that’s good or bad?
D- I actually think it’s better, the soft approach.
I think her book (“the Life Changing Magic of Tidying Up) was more hard line than people were really ready for.
Me- Do you believe what’s happening in the show?
D- (Makes a smooshy face) On the two I watched, yes. Yeah. Actually.

Me- Janice, what do you think about pushing people?
Janice- I think the softer approach is the way to go because if someone has that much anxiety about letting things go (or fear or whatever the emotion is), pushing them with hard and fast rules isn’t going to work. They will close down and push back even.
Me- Have you seen that happen in your work?
J- Yes.
Me- What happened?
J- Either they just walk away or they need a break or they suddenly they aren’t getting rid of anything. It’s more they just aren’t with me any more. 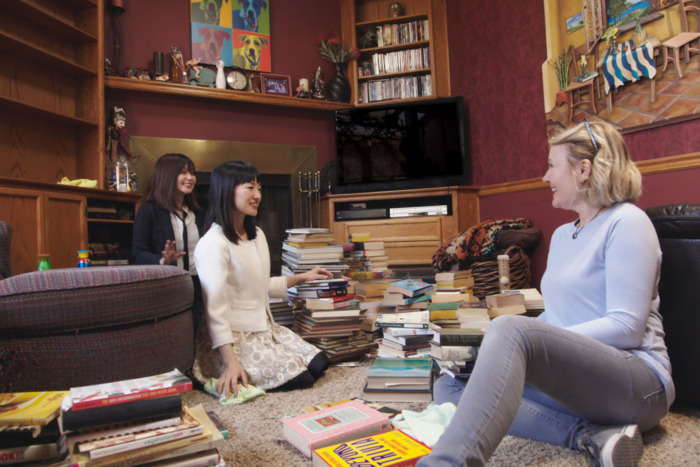 D- She walks in w her methodology.
G- There are steps 1 through 5.
D- Whereas we are much more versatile.
G- There was the one where her husband passed away (episode 4). Marie was ready for the books. Margie wanted to do sentimental clothing. And so Marie left and let Margie deal with the clothes.

Lie #3 Professional organizers leave you with a mess

This was the most disturbing part of the show for the group of us watching together.
Yes, there are times when we don’t finish the project in one session. But we will never, EVER leave you with a huge mess to deal with as homework. Your space will always look better than when we arrived. My mother taught me that rule and I take it seriously.

Wenona- I can’t imagine, if I was searching for organizers and I wanted to get a feel for what was out there and I watched this and saw her dump everything on the bed. I’d be like, forget it!

Janice- That’s what I was thinking! People would be turned away.

My friend, John, hosted our viewing party in his very organized house. As an accomplished movie editor, he had something to say about this which was expressed in the editing:

John- TBH, the fact that they show her leaving 3-5 times an episode makes me think: What is she DOing?!

Gina- I feel like it helps when you have a relationship with [people], then they trust you more and are able to go through the process. 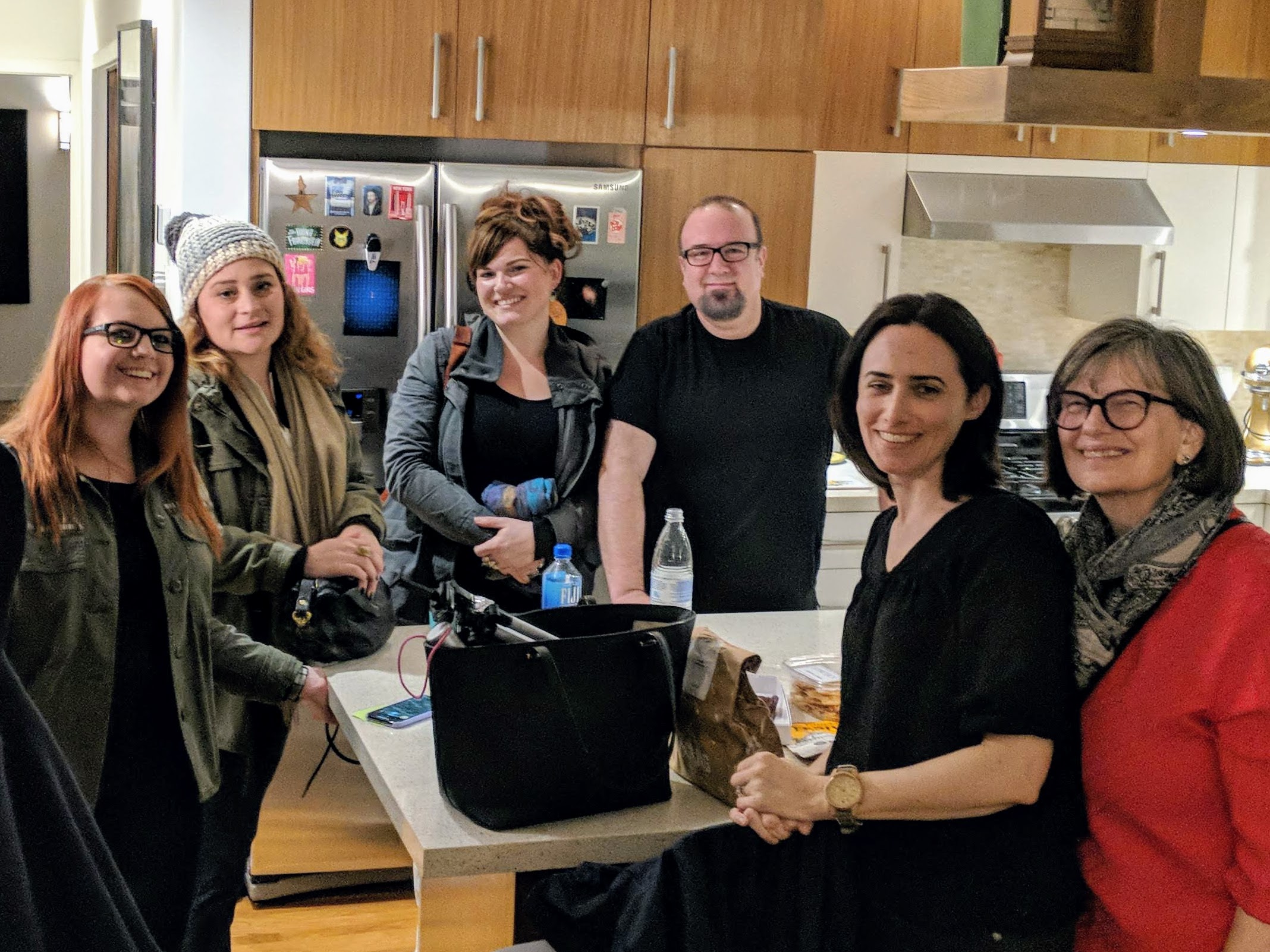 Janice- A lot of [people] tell me they wouldn’t do ANY of this if I weren’t physically there.
Me- Even if I’m not touching anything, they say, I wouldn’t do this if you weren’t here.
W- And again, we tailor things to different personalities and different situations. So I think that’s something we do that you don’t see in the show.

Maybe this is what lawyers feel like when they watch “Law and Order”! It’s impossible to accurately portray real life on camera, even in reality TV. We all know this of course.
I found the show incredibly entertaining and would love to see another season even! My favorite aspect is the final truth the show demonstrates over and over again about getting organized.

Truth #5 Decluttering, tidying, and organizing can change your life

In each episode, no matter how committed the participants were at their first meeting with Marie Kondo, by the end of the process they were believers (or at least they proclaimed themselves so on TV.)
Marital troubles were diminished, stress levels plummeted, and smiles appeared on faces.
We see this at work a lot more than most professionals get to see. Organizing is very rewarding. Discovering that what you own very rarely brings you joy is powerful knowledge to have. Click To Tweet

So while Marie’s 5 lessons and strict folding techniques are interesting, they aren’t the heart of her message.

And, like the Whole 30 isn’t for everyone, if it gets more people to be mindful of chemicals and preservatives in their food, that is great!

Living with clutter and stuff you don’t like is a bad feeling. I hope you’ll take what you like from little Marie and make your home a happier place with that information.

Let me know what you think of the show!

Sign up for our newsletter and get the guide for free!

Find out my favorite way to declutter any space

Send me the guide